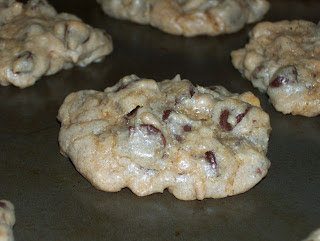 Here I am! Barely beating the cookie challenge deadline! Whew! I made my favorite four-ingredient cookies, which I wrote about here. But I'll post the recipe again exactly as I made it today.

Preheat oven to 350 degrees. Mix peanut butter, sugar, and eggs in a bowl with a wooden spoon until blended. Add salt if needed. Stir in chocolate chips. Drop rounded teaspoonfuls 2 inches apart on an ungreased cookie sheet. Bake 10-12 minutes or until cookie bottoms are lightly browned. Cool on cookie sheet 2 minutes before removing to a wire rack to cool completely.

And here's a first photo of Baby Peanut. You know, just because. 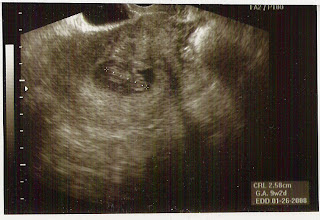 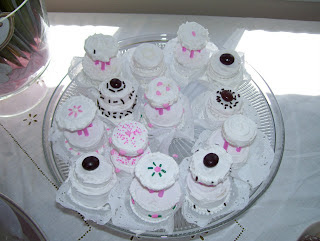 Thank you all so much for all of your bridal shower game suggestions! At the shower I hosted for my sister, we played this Martha Stewart game that Theflyingmum found for me. Each person wrote an abbreviation of their relationship to Emily, the bride, under their name on their nametags. (I opted for MOH - Matron of Honor, instead of SOB - Sister of Bride.) There were no prizes handed out for it; we just used it as a get-to-know-you game since there were so many people who didn't know each other.

The second game we played was given to me by my friend, Heather. Each table had a flower centerpiece with a poem placed next to it. The poem was passed from one woman to another after each line. ("Emily and Jarred, what a wonderful pair/Give this to the woman with the longest hair." Etc.) The last line of the poem was about whose anniversary is closest to the wedding date. That person got to take the centerpiece home for her prize.

In the invitations, we asked everyone to bring a favorite recipe and a spice or seasoning from the recipe for Emily to stock her recipe file and spice rack. We had planned to play a third game where we'd list the spices and people would have to guess what the corresponding recipe was. We ran out of time, though. 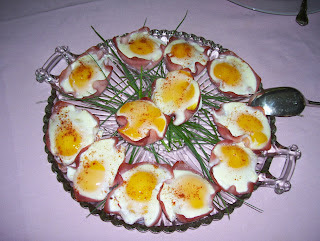 The favors were little packets of coffee, cocoa, and tea, since the wedding has a coffee theme. Everything was done in Emily's colors, pink and dark brown. The menu was quick breads, baked oatmeal, fruit trays, ham and egg cups, and tea cakes. We had coffee, iced tea with mint, orange juice, and water for the beverages.

That's right, I get all of my cutting-edge culinary ideas from children's resources. While I did bake the ham and egg cups, my friend Renee made all of the tea cakes. Because she is a saint, and also crazy. The cakes are made from Oreos (No dairy! So healthy!), and she used dairy-free frosting and decorations. (No, I didn't let Katherine eat the espresso beans, even though they, too, are dairy free.)

Preheat oven to 350 degrees. Spray the cups of a regular-sized muffin tin with cooking spray. For each serving, lay one slice of ham over a muffin cup, place a tomato slice in the center of the ham and gently press down to insert into cup. [Salt and pepper the tomato slice.] Pour contents of one egg on top of each serving. Place pan in oven and bake for 20 to 25 minutes or until the egg yolk is cooked to your liking. Remove from oven and allow to cool for one minute. Using a spoon or spatula, lift each egg cup from the muffin tin and serve. [I served them on a bed of chives, to look like flowers and their stems.]

*Be careful about what type of ham you buy, as some varieties have dairy filler. Also, if you have the ham sliced at the deli, make sure they wipe down the slicer so there aren't any traces of dairy left from the last item.
Posted by Nowheymama at 8:05 AM 3 comments: 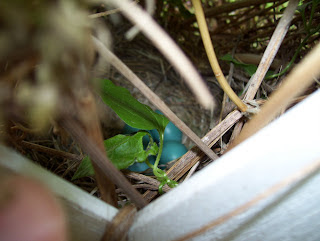 So, what's up with you? Me? Nothing. Just summer stuff, wedding stuff...oh yeah, and a surprise pregnancy.

Yep. Due date January 26, 2008. That's one week before Eli's second birthday. Mostly I am excited, but I'm also very nervous. My sister and I are nine and a half years apart. Katherine and Eli are four and a half years apart. I don't know how this two-year spacing is going to work. This is what I get for saying, "I don't know how they do it!" about friends with closely-spaced children. Now I get to find out for myself. We've always wanted three children, but my timeline and God's were a bit different. Ah, well. It will all work out.

Although my mother had a dream that I was pregnant with twin boys, we found out yesterday that there is just one Baby Peanut on the way. Scott went out and bought a minivan this weekend, so now he feels ready. "We'll all fit in this house, and we'll all fit in this van." Katherine is hoping for a sister. I pointed out to her that I never had a brother, and she does, and she said, "Maybe Grandma and Grandad will have another baby so you can have a brother, Mama!" 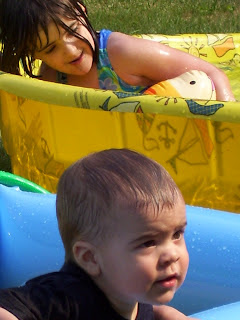 We talked some more about how the baby could be a boy or a girl, and she said, "But either way, it'll be my baby!"

Anyway, I'm sorry I haven't been writing as much or commenting as much, but it's been hard to keep this a secret. I'd want to write about Go Dairy Free or cookie recipes, but my brain was making my hands type "BABYBABYBABYPREGNANTPREGNANTPREGNANT!!!"

I think, like many other bloggers, I am finding that summer is a not-so-much-blogging time. But I'll try to write more frequently now that my secret is out.

Now if I can just cram myself into my bridesmaid dress on August fourth....
Posted by Nowheymama at 7:51 AM 16 comments: 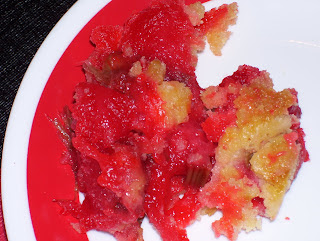 I got a fabulous digital camera for my Mother's Day present, and I am just now, on Father's Day weekend, figuring it out. We had a wonderful day yesterday, lots of good food and fun with family. We made Rhubarb Dump Cake for Daddy, a very easy, very kids-in-the-kitchen-friendly recipe. If you want to learn more about rhubarb (and who doesn't?) , I recommend this site.

This recipe was given to me by Mrs. Taylor, our favorite farm stand owner. I scribbled it in pencil on the back of a church bulletin that was in the car. Two years later, that is still how it is filed in my recipes.

Blend together oil, eggs, sugar, and vanilla. Add remaining dry ingredients. Stir in zucchini and optional ingredients. Spread into two loaf pans. Bake at 350 degrees one hour or until done. I am told this bread freezes well, but it has never made it to the freezer in our house.
Posted by Nowheymama at 9:12 AM 5 comments:

Significant other on a business trip? Come enjoy a relaxing, four-night, five-day stay in Leftbehindville. Your days will begin with young children (ages five and under) jumping on your bed and asking, "Where's Daddy?" They will happily repeat this service every morning of your stay. After a leisurely breakfast of corn flakes and soy milk, the day is yours to fill however you see fit. Some options include: dragging young children on errands, scouring the neighborhood for other children to entertain yours, and making a special trip to the duck pond to wade through duck and goose feces while the children whine that they want to play at the playground instead. (In case of emergency, head directly to Showtime Video.)

You can expect your spouse to place at least two calls a day from Florida to tell you all about his trip, his visit to Epcot, and last night's steak dinner. But he's not the only one with a swanky meal plan! You will have everything in the kitchen cupboards at your disposal, as well as takeout choices: pizza or Chinese.

Your evenings will be filled with the tears of children who miss their father and don't want to go to bed. Put them to bed anyway; your two best friends are on their way over with a chocolate pie. But after the pie, it's straight to bed for you! Only four more days to go!
Posted by Nowheymama at 6:56 PM 12 comments: