The other night, all of the kids were on our bed. Katherine was reading the bedtime story, Eli and Helen were listening, and the baby was kicking and grinning and trying to eat his sister's foot. Later on, Scott said, "I was looking at all of them on our bed thinking, 'Wow. We have four kids.'"
It's been that kind of a week. Usually things cycle around so that one person is in the parental spotlight. As my friend, also a mother of four, says, "I can only worry about one of them at a time."
This week has been about trying to focus on everyone at once. Orthodontist! Optometrist! Vision therapist! School registrations! Star of the Week! Field trips! Food allergy issues! Teething! Colds! Sleepless nights! Insurance! Finances! Prescriptions! Phone calls to doctors' offices! Swing low, sweet chariot! (TM Tess)
It's the business side of parenting that throws me sometimes. The feeling that I'm the president and secretary of a small, poor, slightly dingy workplace with untrained, underage employees. But I imagine this part of the mothering job will only increase, so I'd better get used to it.
Time to make some phone calls....
Posted by Nowheymama at 9:04 AM 11 comments:

I'm making Mary Ostyn's Doro Wat (Ethiopian Chicken Stew) via Crockpot 365 for dinner tonight. Hopefully the hard-boiled eggs will sell the kids on it.
I cut Eli's hair! I even used two different clipper guards! And it looks decent! No, he would not let me get a photo!
Thank you so much for all of your haircutting tips; watching YouTube videos was critical to my success. I feel so empowered! Now if my own bangs would just hurry up and grow so I can stop holding them back with clips. I look like Elisabeth Shue in that movie about the autistic sister. 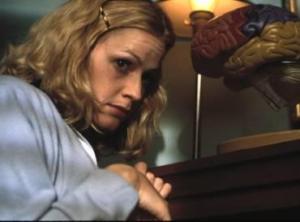 Image from jinni.com
All of this snow/rain/freeze/thaw mess is making everyone's roofs leak. Ours is leaking into Katherine's newly-painted room (NOOO!) and down a chimney into our linen closet. Nothing says fun like two tons of wet, moldy linens.
Eli had to take a sign of spring to school today. HAHAHAHA. Scott: "What did you send? Bird poop?" I sent a branch with very confused buds, thank you very much.
My parents lent me a copy of The Lincoln Lawyer. Where can I hide to read all weekend?
Posted by Nowheymama at 8:21 AM 7 comments:

It's time for an edition of Things I've Tried Lately That Were Sent to Me But I Was Not Paid to Review, not to be confused with Uncompensated FTLOG.
Enjoy Life Soft Baked Cookies
We received Enjoy Life's new and improved Soft Baked Cookies in Snickerdoodle, Double Chocolate Brownie, and Lively Lemon. I took them to a Super Bowl party where there was a gluten-sensitive college student and my dairy-allergic daughter. The college student loved the Double Chocolate Brownie cookies and said they were a real treat. Katherine liked the Snickerdoodles best, which surprised me. I would have guessed she'd pick the chocolate ones. We sent some Double Chocolate Brownie and Snickerdoodle cookies home with the college student. The Lively Lemon cookies were untouched, so Scott and I ate them in the following week. We loved them. There are little crunchy lemon bits in them that have a great texture and flavor.
The cookies were well-received, but aren't something that fit in our budget. I might buy them for a situation like the party where I want people who have allergies/intolerances to feel secure about what they are eating.
No Whey! Chocolates
Chocolate? Good.
Company Name? Good.
Variety? Good.
Dairy-allergic child's happiness level? Through the roof.
No Whey! Chocolates is a great small chocolate company featuring dairy-free chocolates. They also have gluten-free and soy-free candies. They are currently featuring some super cute Easter candies that are perfect for Easter baskets. We loved trying their chocolates.
This review was written for Go Dairy Free.
Gardein Garden Protein
We tried their Chick'n Scallopini, Beefless Tips, Buffalo Wings, Chick'n Good Stuff, and Crispy Tenders. The kids liked the tenders and the Good Stuff, which is like a stuffed chicken breast. Scott and I liked the Buffalo Wings and Scallopini, but none of us cared for the Beefless Tips. I might buy the Chick'n Good Stuff sometime because it is like Chicken Kiev or Chicken Cordon Bleu, two dishes that are hard to make dairy free.
This review was written for Go Dairy Free.
Posted by Nowheymama at 8:05 AM 6 comments:

I had a happy-go-lucky post in mind, but then Disney cancelled Catherine Newman's Dalai Mama Dishes column, which is my favorite recipe column and the ONLY reason I go to Disney Family.com.
If you've ever read and enjoyed her column, please go tell them how you feel. That is, if you are actually able to log in and leave a comment.
You can still find Catherine at her personal blog.
Posted by Nowheymama at 12:25 PM 6 comments:

"Mama, Spring is trying to come, but the snow keeps smooshing it down." --Eli
Posted by Nowheymama at 12:22 PM 5 comments:

Apparently writing Graham's birth story was more taxing then I expected, especially given the fact that I put it off for six months. And in one week he's started eating cereal (Oats are what the peditrician recommended this time around for the sibling of a food-allergic child.) and sprung two teeth. STOP GROWING. IT'S ALL TOO FAST. Also, please let me sleep again.
Speaking of teeth, the dentist recommended an orthodontist consultation for the eldest yesterday. I just made the appointment.
Kids--they're a lot of work, but they're worth it.
Posted by Nowheymama at 12:40 PM 2 comments:

Six months ago today, I checked into the hospital at 7:30 am, was taken to a labor and delivery room, and prepped for yet another induction. Every time someone looked at my chart I was told, "Oh, this will be fast and easy! It's your fourth baby!"
First was the Foley catheter. I was allowed to walk the halls, which I'd never been able to do before. Around 11 am, the catheter came out, but it hadn't done anything. I was still at 2 centimeters. At 12:30, I was started on Pitocin. My sister arrived. And we waited. And waited as the nurses kept upping the dose and I slooowly dilated. When I couldn't stand it anymore, I asked for an epidural. The anesthesiologist hit a blood vessel and I could feel blood running down my back. Although I was dilating, the baby wasn't moving down. After several nurses performing exams to figure out what was going on, they told us that it felt like his arm was blocking the exit and the doctor might have to do a c-section. Around dinnertime, they ordered an in-room ultrasound, which didn't show an arm in the way, but did show that the baby's head was tilted back at an odd angle, making it difficult for him to descend. They propped me up into a sitting position, which made my legs totally numb. At some point, my water broke, but the baby still wasn't descending.
As the evening wore on, the baby's heart rate began to drop during each contraction. A heart rate monitor was placed on his skull. They stopped the Pitocin, but that stopped the contractions. When Pitocin was started again, his heart rate began to drop again. The doctor said we needed to consider a c-section. He left to let us 'think about it,' but he was already in his scrubs. Scott and my sister promised me everything under the sun ("I'll work from home!" "I'll come back and stay with you another week!") to get me to calm down and agree to sign the papers.
Once I did, my epidural was double-checked and I was rushed into the operating room next door. There is nothing more glamorous than being heaved from one bed to another by a bunch of medical personnel. They began prepping me while I tried to calm down. As the surgery began, I started to shake uncontrollably, which the two anesthesiologists assured me was common. They both held my left arm firmly, which was calming, and instructed my sister and Scott to do the same on my right. I heard the voice of a med student who had shadowed the doctor at my appointments say, "You can blame this all on everyone who said it would be fast and easy," which made me smile.
While it wasn't an emergency c-section per se, it was fast. There was a lot of movement and talking, with people telling me what was going on and the doctor explaining what he was doing to the two med students and to Scott and my sister. Suddenly, everyone was dead silent. Then the doctor said, "Thank God. Thank God." Me: "WHAT? 'Thank God' what?" My sister: "Sarah, the cord is around his neck." I found out later that the doctor had to unwind the cord before he could get the baby out of the incision, and he never would have made it down the birth canal. The cord was around his neck four times, pushing his head back at an odd angle and wrapped so tightly it left marks.
So, at 11:28 pm, Graham was born. Scott held him and my sister held my hand while the surgery was finished. My sister was the first one to notice his dimple. Then when we were wheeled back to our room, I finally held him and fed him.
I love you, Graham.
Posted by Nowheymama at 12:24 PM 17 comments: